A downloadable game for Windows and Linux

Wizards with Rockets is a 2D top-down shooter featuring singleplayer campaign with AI and network multiplayer. It is pretty self-explanatory. Wizards have rocket launchers. And they're fighting each other with them.

Making it as a technical challenge for myself, and just as a "simple" game for the sake of making a game and releasing it.

Made with C Programming language and Allegro 5 graphics and multimedia library. The rest of the code/game engine made by me.

In the game, you play as a wizard with a rocket launcher. You traverse through levels, fighting other wizards that shoot at you and move around, along the way. The goal is to survive and get to the end of the game.

Currently under development. Many great features are planned, such as full-working multiplayer, physics, enhanced with scripting language, in-game cinematics, and more gameplay features to make the game more interesting.

I intend to release this game on Steam at some point. It may take a while longer. But one day, eventually.

For now, feel free to download the game free of charge, that's totally ok. Once the game is much nearer to "version 1.0" and Steam release, I will disable the free option. But I'm far from doing that. Feel free to play the game as it is for free in the mean time!

The game can be run in server or client mode. To run it as a client open it in command prompt and pass in the arguments --server_addr <server address>. 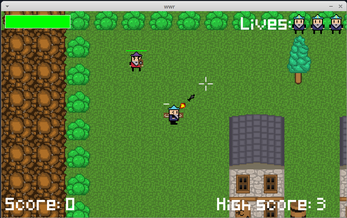